What I am Reading: 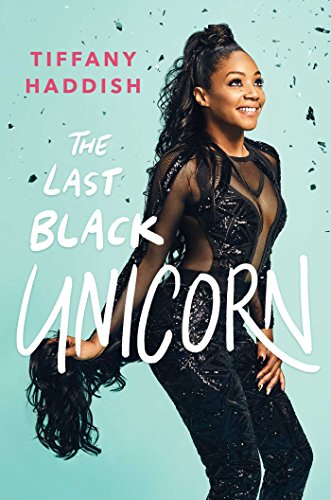 Tiffany can’t avoid being funny—it’s just who she is, whether she’s plotting shocking, jaw-dropping revenge on an ex-boyfriend or learning how to handle her newfound fame despite still having a broke person’s mind-set. Finally poised to become a household name, she recounts with heart and humor how she came from nothing and nowhere to achieve her dreams by owning, sharing, and using her pain to heal others.

By turns hilarious, filthy, and brutally honest, The Last Black Unicorn shows the world who Tiffany Haddish really is—humble, grateful, down-to-earth, and funny as hell. And now, she’s ready to inspire others through the power of laughter.

She’s not really a writer though.

This one is kind of pricey at $12.99.  Click here to get it.  Adult material. Loads of profanity and she poops in  dude’s shoe.

One badass girl, a shitload of murderous narcos, and nonstop action from the opening line. This is a no holds barred *introductory action sequence* filled with deliciously unrealistic action and an over the top heroine. It’s a blazing fast 90-page read.

It’s *not* a full novel with a full plot, character development, etc. If you want those things (ya greedy bastard!) you’ll have to read my *next* book, which ain’t free! Cheapskates love free books, but my baby girl don’t like cheapskates…

This book is just the teaser to get your blood pumping and sucker you into buying my next book. (I’m sorry for being such a greedy bastard that I actually want to make a living.)

Grab your free copy, get glued to your seat, and then resentfully buy the next Badass Mexican Girl thriller!

Get it here for free.

The Last Gasp…before you die. By Robert F. Barker

The last time DCI Jamie Carver involved a would-be victim in his hunt for a serial killer, it ended badly. now they want him to do it again, only this time the ‘victim’ is a dominatrix! As if he hasn’t enough on his plate…
– A brutal killer poised to strike again
– Shadows of the past that still haunt his dreams
– An investigation under mounting pressure to succeed
– A beautiful woman whose bizarre lifestyle may be key to finding a killer.
The first in the DCI Jamie Carver Series, and Book 1 of The Worshipper Trilogy, LAST GASP is a novel of murder, deception, sexual intrigue and human weakness. It launches a series of gritty crime thrillers set mainly in and around England’s Northwest, featuring the author’s resourceful, but sometimes conflicted, murder detective, DCI Jamie Carver.

Is is just me or do these white women fantasize about slavery? Being captured and forcibly sexualized is not sexy.  What in the entire pink hell?

He’s captured her freedom, but can she capture his heart?

A Kindaran spy named Snowberry by her captor gets more than she bargained for when her mission explodes in her face, and she’s enslaved by the northern barbarian, Adun. He strips her rights away and drags her far from civilization where isolation and culture shock form a stronger prison wall than any stone or bars. The only key to her freedom may be using her whily espionage talents to unlock her captor’s heart.

Captive Heart is a pulsating game of cat and mouse. She is a not-so-diminutive spy who must play the part of the willing captive. He is a sardonic man cast as the villain whose wild hair and tattoos cover deep, hidden depths. When Snowberry finally gets the chance to shed that hateful name and her captor forever.

Yes, this one should be free.