Two Nights with You: Yuri

Excerpt  Two Nights with You: YURI by JK Rivers

After checking into their room, Yuri unpacked her toiletries. There was a window in her shower, and on the other side of the open window was another window. Her neighbors were showering and enjoying themselves by the sound of the woman’s moans.

“Looks like we’re not the only ones who thought a shower would be a good idea.” 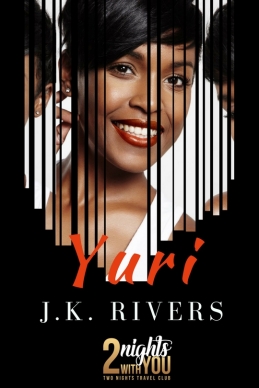 Sven chuckled, turning Yuri to face him. “I’d kiss you, but we both have airplane smell on us. I’ll start the water. Grab the towels and meet me inside.”

Sven and Yuri’s shower lasted longer than their neighbors’, and they may have been louder. All of it magnificent—from Sven washing her hair to washing her. She returned the favor, but after he turned her body, pressed her front to the cold tile wall, and worshiped her body with his own.

Sated and clean, they collapsed on the bed in a tangle of limbs.

“I think we should stay in bed,” Yuri suggested. “Get room service, make love all day. I don’t have anywhere to be until tomorrow.”

“You’re trying to kill me. Or, at least, wound me.” Sven grunted, a grin on his lips as he rubbed circles on her stomach with his hand.

“Get dressed. I’ll feed you. We’re up on the mountain in the next hour.”

“Bossy.” Yuri smirked, getting up from the bed.

“You like it.” Sven winked before standing and pulling on a pair of shorts and a cotton tee.” Yuri looked in her bag and pulled out a colorful jumper with tropical flowers. She tossed on brown wedge sandals and made sure to wash her face and brush her teeth. Sven watched her through the mirror, and she smiled back at him as she set about putting lotion on her arms and legs.

“Angel, put on some tennis shoes.”

Sven crossed his arms, his shirt shifting with his muscled arms.

“Trust me, the shoes work. I hope I can convince you to wear them and nothing else to bed, but honestly, your feet will be sore from all the walking. Trust me.”

Yuri toed off her shoes and pulled on a pair of tennis shoes.

Sven tossed his head back and roared with laughter. He had a great laugh, but not when aimed at her. “Stop laughing, Sven.”

“I can’t help it. You’re adorable.” Sven crossed their small room to stand in front of Yuri. “The shoes are fine. You’re fine. Food first, and then Sugarloaf. Don’t be a sourpuss.”

“Impossible, you could never be ugly. Inside or out. Your beautiful glow knows no bounds, Yuri. It’s one of the reasons I love you. People can’t help but gravitate toward you. They get just a hint of your light, and they come from miles around just to be near it.”

“Well, light or not, I can get pretty ugly when pushed into a corner.”

Sven cracked a grin again, his eyes crinkling at the corners. He gripped her face in both hands, his eyes peering into hers. She didn’t know what he was searching for, but he obviously looked for something. The longer they stood there staring, the more his face changed. She hadn’t seen the darkness behind his eyes for days. She’d thought it a figment of her imagination. Wrote it off as her own personal issues rising to put a stop to her happiness. But then it appeared again. As he held her, as he searched for answers, she saw it, peeking out from behind the current of blue.

“There she is,” he whispered moments later, the darkness firmly tucked away. “My beautiful angel, and her brightly shining light. You can pull any man from the darkest of places and bring him back to life.”

“How would you know?”

“Because it’s what you’re doing for me. I shouldn’t want you. Hell, I’m fucked up, and I know you know it; you just haven’t brought it up yet. But that’s okay. We’ll talk about my shit when the time is right. We’ll talk about yours, too. But for now, we’re in Brazil. A city that I love, with a woman that I love, and I plan to make the most of it.”