Truth is stranger than fiction at The Company.

Things get especially exciting when the unknown comes wrapped in the gossamer thread of magic and mayhem. On the other side of this shimmery coin lies Love, the protective cloak that gives all we do meaning and validation. Thus, the world of the supernatural is a prelude and backdrop to romance that unfolds in all its glorious colors.

A woman uses a love potion to attract a man and repel another, yet gets more than she bargained for when the unexpected happens right where she least expects it.

A man, both angel and demon, struggles with his identity while danger lurks around the corner and a new, powerful emotion takes over his being, shaking him to the core.

An ambitious account executive is thrust in the midst of an old war between vampires and hunters, a kiss has her float in mid-air, and the world she’s always known shatters around her.

Trapped in the Company by Olivia Gaines 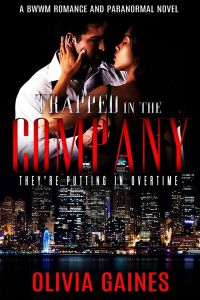 Tuesday was Clarice Wilcox’s favorite day of the week.  There was something so special about a Tuesday morning.  Unlike Monday, when the brain is still grumbling over having to be awake and working, by Tuesday, a brain and body are over the shock, ready to get some things done.  This Tuesday was Clarice’s day to get things completed. However, this week at The Company is going to change her life. Elliott Marsden was going to make sure of it especially after the two are Trapped in Company all weekend. Overtime isn’t the only thing Elliott is trying to get in with Clarice. I don’t know what it is…about Clarice Wilcox which sets me on fire and launches my body into reproductive mode…but I got it bad for that woman.  Elliott Marsden is the top salesman at The Company and he loves his job. He is also finding out that what he feels for Clarice is a bit more than just the physical.   That man drives me insane…but as much as I try to avoid him, I can’t help myself.  I am drawn to him like a drunken moth at a camp site.  I feel like flying into the flame knowing it is going to kill me. Dying happy is now on my list.

It all went wrong.  Clarice’s plan was to use just a bit of the love potion to attract one man, hoping to repel another, but a twist of fate and poor timing left her trapped in the company with Elliott Marsden for the weekend.  Keeping her reputation intact was the least of her concerns; she needed to be extra savvy to survive a night with Elliott 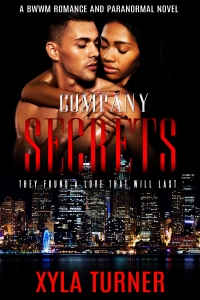 Jessica Cayman is an ambitious Account Executive for Delancey, Inc. She stays in her lane, works hard and has her eyes set on becoming a partner within the next year. The plan is easy until Sage Wesley, III from The Company refuses to work with her.

His aversion to Jessica turns into a kiss that literally has both of them off their feet. Floating in midair? Then a bite on her neck?

There are too many secrets and Jessica soon finds herself in the middle of an old war between vampires and hunters…too many company secrets.

Born in Hell’s Kitchen, New York, Cruz Black spent most of his life attempting to escape the stifling, horrifying bonds of his bloodline. Part Angel Child, part Demon Child, his upbringing was built on the opposite side of ‘normal’. But, things change when the notorious King Angel Child of New York, Dr. Saint Aknaten, takes him under his wing. During an investigation into a Los Angeles hate crime case assigned to him by Saint, Cruz finds much more than he bargained for causing the sparks fly in an inferno of attraction when Cruz meets Chef Erika. Like brimstone bricks, the pair fall for each other fast and hard, and the chemistry is unmistakable. Cruz has found his mate, but will Erika stick around once he reveals the true nature of a beast?

Erika Goodwin is the girl…

The man’s body oscillated like swaying silk as he moved a hair closer to her during their introduction. His hand reached out to her, his motion fluid. It was the oddest thing, yet strangely sexy. She let her gaze travel to long fingers with perfectly trimmed nails, then looked up to his face. His lips were the color of pale pink roses, the lower one slightly plush, the upper one indented from a prominent cupid’s bow beneath the mustache. The deep cleft in his chin was…simply delicious. And then she focused on his eyes, and her breath hitched. One was definitely lighter than the other, but they seemed to darken before drawing cool once again into shades of gray and deep purple. ….

When the two cross paths…

… sparks fly in an inferno of attraction. Like brimstone bricks, the pair fall for each other fast and hard, and the chemistry is unmistakable. Cruz has found his mate, but will

Erika stick around once he reveals the true nature of a beast?

Link to Barnes and Noble: http://bit.ly/245pGLN