Friends with Benefits: A Novella 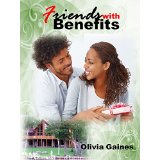 Grayson Broche led a simple life and was a man of refined taste. At the end of the day, he wanted to come home to his wife, his children and his dog. Currently, he had none of those things. The closest he had come to a stable relationship was his ten-year friendship with his best friend, Charlize. Dr. Charlize Filleman was a busy woman with no time for men with no ambition or jokers who wanted to ride her coat-tail. Her last date was three years ago and she was fine with that! The closest thing she had to a relationship was a weekly cooking date with her best friend Grayson, whose luck with love had also run short. Grayson proposed a plan to add a few additions to the friendship as they worked on her new cookbook. Adding in a pinch of reasoning, a dab of logic and stirring in some spice, these two to create a great recipe for an ideal relationship. And that is why Grayson Broche proposed they become friends with benefits.

Available in paperback and ebook.  Get it on Amazon.

This entry was posted in books, writing.