I m super excited about the new season on AMC.  I am even more anxious to see a martial arts dynamo kicking some butt on screen from the pleasure of my couch.  Into the Badlands premiers on AMC on November 15th staring Daniel Wu. The name might not be familiar to many American audiences but the face is.  Some may even remember him from The Man With the Iron Fist, he played Poison Dagger with that infamous line:

Poison Dagger: I’ll see you in hell!
Jackknife: [Chuckles] Yes, I suppose you will. I’ll save you a spot by the fire. 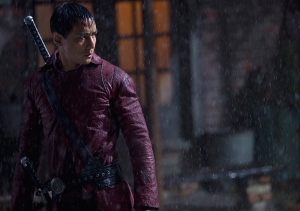 Fans will also be very happy in this new role that Daniel is taking on as Sunny in Badlands.

AMC deems Into the Badlands as “a genre-bending martial arts series very loosely based on the classic Chinese tale Journey to the West. In a land controlled by feudal barons, Into the Badlands tells the story of a great warrior and a young boy who embark on a journey across a dangerous land to find enlightenment.”

Of course, most people aren’t familiar with 16th Century Chinese folklore of a priest and his three disciples Monkey, Pig & Friar Sand who Journey to the West to find the Buddhist Sutra.  The first 12 of 100 chapters are background info on the Monkey King and take the pebble from my hand grasshopper kind of things. The final chapters of the story describes how these unlikely heroes vanquish demons and monsters.  In order to find the Sutra, they must journey over the Fiery Mountain, cross the Milky Way, and after battling many threats to their sanity, finally arrive at their destination – the Thunder Monastery in the Western Heaven.

Yeah. That is the story in a nutshell. I would rather just watch Daniel kick some ass.

I was curious though, since he is in between Hong Kong and LA, if he would be tweeting live with viewers. 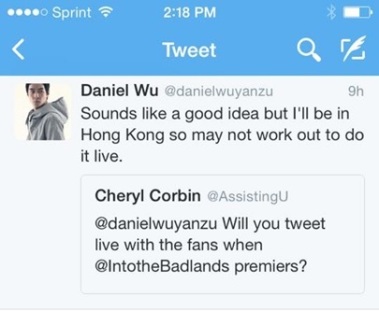 Color me disappointed, but I wasn’t the only one.  Jason was a little bummed as well. Never fear @Jason_The_Ninja, he won’t let us down. 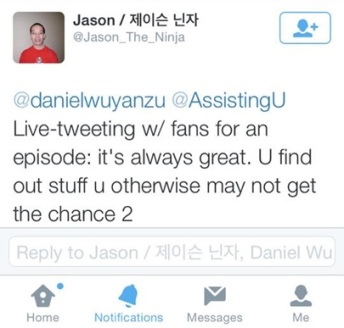 Join us in November on Twitter as we tweet live with me and the show.  I am certain @Jason_The_Ninja will be there as well.