I have come to the harsh realization that some people are not happy not matter what. It does not matter if they have a good schedule on the job, the job still doesn’t pay enough.  It doesn’t matter if they are respected and revered by their co-workers; everyone wants to dump their work on “me”. I have found that it doesn’t matter, they are unhappy.

During a recent training session, our guide in the learning exercise talked to us about self- talk.  Self-talk are those positive words that we say to ourselves to get us through sticky moments.  You know, like the first time you were on a roller coaster and truly learned to pray. Or the time when you almost when to jail and even though you told yourself you were talking to Jesus, you really were just giving yourself a friendly reminder to never do this shit again. Those moments are called self-talk, positive thoughts in positive situations.

When you think positive thoughts, positive things happen.  When you speak positive words, you think positive thoughts.  If you need some help with either, there is an app for that. Ironically, sometimes we need some help.  Our inner children have been disappointed and we get hurt. Instead of dealing with the disappointment, we become unhappy and blame others for our maladies. This disappointment can turn you into a Bitch; a mean, surly, and angry one that no one likes.  Never fear, there is a cure.

When you arise in the morning, be thankful that you woke up, somewhere in the world, someone else, did not. When you look in the mirror, say hello to that face, tell that face you like it and are glad to see it.  There are soldiers returning from Afghanistan that are only coming back with half of their faces. These soldiers get to relive that nightmare for the rest of their lives thinking, if I had just moved two steps to the left instead of two steps to the right.

Today, I want you to recall one good thing that happened to you last week.  Now I want you to play for one good thing that is going to happen next week. Now give yourself some love, go ahead, wrap your arms around yourself and thank your vessel for still being able to carry your soul. Go get your vessel a cookie, because both of you deserve it. Because you will never perform at the level of your potential, you can only perform at the level of your beliefs.  You have to be happy or at least moderately content to do either.

This entry was posted in Jobs, Life, love.

I think I hate you

What I do mind however, is that this training is designed to help us do our jobs better, and for some reason you can’t seem to shut up. You have talked all throughout the training and gave me a headache. I think I hate you. I digress, please allow me to back up and bring you to this point.

We are expecting at least 100 staff members and our guest speaker flew in from Seattle. The poor fella spent most of the night in the Atlanta airport and finally arrived in Augusta at 2 am. He was tired, he did not look happy, but he did his job. He was ready to teach and we were ready to learn; well most of us.

The company provided a working breakfast. As we were going through introductions, there are two co-workers behind me that felt they need to comment on everything that is being said. Shut up already, I can’t hear.

As we move into exercise one, a constituent, who just so happens to make jewelry, decided she needs to share her online catalog on her phone with the two co-workers again, who were behind me. We were in training from 9 am until 2 pm with a forty-five minute break. (Please excuse me for this moment, but even as a Wordsmith, sometimes the best word choice is the obvious word choice.) Would you believe those witches talked the whole time?

Yes I wanted to say the B word because only a couple of witches could be so selfish. Our whole row was angry at them. I even asked them politely to please–you know, we can’t hear. They still did not shut up. Here is the rub, they were educators! If students in their classes did the same thing, they would put the student out. When we went for break, I took a break and moved to the other side of the room. When the session started back, can you believe that everyone was quiet and listening to the trainer and I could still hear those witches yapping.

You are not that interesting that you have THAT much to talk about.

I had a headache. I had lost my Saturday. I had a loaded carb breakfast. I ate shredded pig for lunch and my tummy was not happy. It’s their entire fault that I didn’t feel good and that I did not get the full effect of the training becaase of thier yapping.

To my constituents with no manners, I think I hate you…….

She says the darnest things….

It never fails, we sit down to lunch, I load in a mouthful of salad, and out of her mouth spews forth something that makes me almost choke. My friend 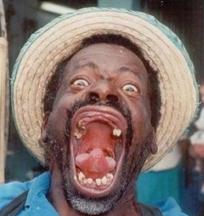 Aubrey gives new meaning to colloquialisms. It is not as if she uses the phrases incorrectly, but she laces old school wisdom with words that are not usually paired. For example, she stated a young lady showed up to an event looking like “damn it, I’ll bite ‘cha!” I’m not sure what that is supposed to look like, but I had a visual in mind.

I often find myself marveling at her wisdom while attempting not to break out in laughter at her word choices. Here is another example. We were speaking of a friend of hers who was going through some adversity. Try as her friend might, things were just not quite working out in her life. Aubrey looks me straight in the face and tells me, “Sometimes God presents you with an opportunity to get out of a bad situation.” I know right? I thought the same thing, how accurate the statement is considering there have been bad situations in my life where, when the miraculous opportunity presented itself to escape, I did. However, she ruined the pearl of wisdom by adding, she was okay to be alone, and because it was giving her lady parts an opportunity to marinate, mature and develop a pure flavor. Huh?

I almost wanted to leave the table but curiosity forced me to sit still and hear more. The conversation continued about this friend who chose a man over her children.

“What kind of man do you have that he would allow you to do such a thing? He is not a man especially, if he encourages you to put him before your children.” Again, I know right. Yet she follows it up with the next pairing, “that kind of d*ck can make a body sick.” Huh?

I can’t help but laugh, because she says the darnest things. Just when I start to think I will be able to finish my meal without choking, along comes a young fine specimen of manhood that gives our table a courtesy glance. He nods, I smile. Aubrey  makes head on eye contact, the young man speaks, “How you doing?” I now find that I am actually holding my breath. Aubrey answers him with, “Anybody I can, you next?”

The young man was shocked. I was shocked and the only thing left was to laugh. All three of us, and the young man, said he would have to remember that one. I finally am able to finish my lunch with a shake of my head, because she says the darnest things.

This entry was posted in Food, Girl Talk, Life and tagged big mouth.

I Broke My Glasses Again

I have a Senior Thesis due in two weeks for my Economics major… so I drew a picture of this giraffe.

My paper is about the Massachusetts Health Care reform and writing this thing is so… Incredibly. Dull. But you know what’s not dull??

This is a picture I drew of a polar bear cookie that I got from Starbucks… a couple of months ago.

For me, writing long research essays happens in stages… and it’s the same thing every time.

Stage 2: Watch some of Olan Roger’svideos

Stage 6: Underline things in the articles

Stage 7: Pretend the assignment does not exist. Surf Pinterest indefinitely.