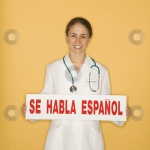 I am often amazed at the things we take for granted. I am also sometimes appalled at the things in which one can assume. Today I share with you my thoughts of being bilingual.

In my customer service class I worked with the students on resumes. The logic behind the process; each person should have three versions of a résumé. Version one is the ideal job you would like to obtain. Version two is the job you are currently performing along with the accompanying skill sets. Version three is the low end version that downplays what you are capable to get you in the door of your ideal company in version one. Bonus points are rewarded for those who are bilingual. Stay with me, we are headed full circle.

One of my Spanish speaking students thought I was full of malarkey and posted all three versions to Monster.com under 3 separate email accounts. Her phone will not stop ringing. One company called on all three resumes and offered a relocation package. Her value she is bilingual. Yes, I have a point.

As American companies value her ability, Spanish speaking cultures also value those who speak English. The better jobs for workers

who have yet to have a trade are in tourism areas. The better waitress and waiter jobs are in areas where you can explain to Nana she shouldn’t order that spicy dish. I found this out day one at Fuddruckers when the order taker could not understand my name and my order was listed under Yer. The loudspeaker needed work, but the dining assistant figured the order was mine since I was the only person not responded to the loudspeakers call of “Peek up urder por Yer.”

Equally hilarious were my attempts to order breakfast at Burger Bing which elicited a look of sympathy as he answered me in English. The hotel tour concierge thought it was “cute” that I was learning “some Spanish.” And last but not least, I found out at the Ponderosa, which was “outside” the tourist strip, that native Spanish speakers didn’t even attempt to converse with me in either language. She started pointing at the pictures on the menu board, holding up one finger or two. Well pardon my French!

My husband only laughed as he too told me my year of high school Spanish wasn’t really working well. I did not know how to convey that I actually had two years in high school and four in college, but languages, like any muscle requires exercise. I, know the language as well as three others including southern Ebonics, but alas I think in English. Being bilingual is an art, make sure you learn to appreciate those who are able to efficiently perform this honed skill and assist those who are trying, because bilingual does work both ways.

One thought on “Bilingual Works Both Ways”

The rewards of stories for children truly are remarkable. It’d really limit the load of teachers and parents in how to convey a message to an innocent child. One benefits of stories is it simply teaches a child how to relate to other people. It also teaches cause and effect basics. Another benefit of looking at children stories is basically that you would be able to teach a kid about problem-solving without him going up to your level. He is able to see and understand how things work in the language of a little child. Above all, it also helps children to be aware of themselves to a greater extent. Thoughts about self-discipline and character progress are being taught effectively. These thoughts are easily grasp by us adults but so much difficult to teach to young child. Children need to see some concrete examples in learning basic principles. Therefore, storytelling is regarded as the effective yet inexpensive way of teaching your students and children the basic principles in everyday life that they terribly needed in the future.